The story of the Albergo Losone

The hotel was founded in 1955 by Charlotte and Charly Glaus.

The founder was a ticket man of the Swiss Federal Railroad who decided to build the first motel in Switzerland with his wife. This small motel, with very simple furniture, successfully catered to the first "motorized" tourists visiting Ticino from all over the world. The economic difficulties and the simplicity of this small motel are deductible from the first price list of the rooms:
Room with windows with glass CHF. 6.-
Room with windows without glass CHF. 4.-

The structure, in the former agricoltural area of Losone, was connected to the main road by a dusty narrow one.
Over the years, the small motel was steadily growing up to become a five-star hotel at the end of the seventies. In that period the first three of his five children, Ursula, Silvia and Michela, were actively involved in the success of the hotel.
August 7, 1978 marked a bad chapter in the history of Albergo Losone. After several days of steady rain, the river Maggia overflowed and flooded the hotel. The devastation was almost complete but miraculously there were no victims. Through the hard work of guests and collaborators and the determination of Charly Glaus, Albergo Losone re-opened after a few months. A taller embankment was built later.

The generational change took place In the years 1991-92. The management went to Charly’s daughter , Ursula, and her husband Thomas Mosberger . They ran the hotel until 1995. From that year onwards the lead is entrusted to the penultimate son, Diego Glaus.
Since 2003, Albergo Losone is annually appointed "Best Swiss Family Hotel" by the prestigious magazine Sonntagszeitung.

Since 2017 it is also Royal Consulate of Norway.

Best Family Hotel in Switzerland. The Caribbean in Losone. 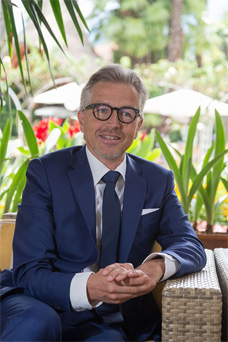 "Our hotel is dedicated to a special guest: the family. A family made up of more than one generation. As a hotelier I have a special mission:
to welcome three generations of children, parents and grandparents, and make sure that they can do the holidays together. The experience at Albergo Losone will be good memories to pass down. "
× Il sito web www.albergolosone.ch utilizza i cookies per misurare e analizzare l’esperienza di navigazione dei nostri utenti. - Per saperne di più Cookie Policy Accetto